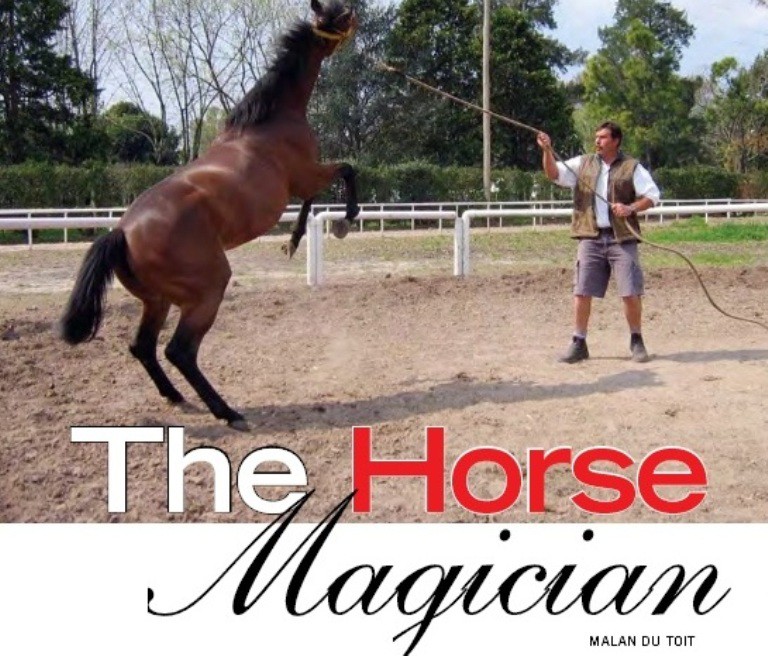 ACTOR Robert Redford endeared himself to millions of moviegoers around the world when he starred as Tom Booker in his self-directed, 1998 feature film The Horse Whisperer. By hook or by crook, the award-winning drama also served to popularise the term ‘Horse Whispering’ as a method of schooling ill-disciplined horses.

South Africa’s Malan Du Toit has what some would consider Redford’s rugged looks, but his high success rate with troublesome thoroughbreds, rather than his appearance, has seen the 52-year-old former pastor of the Dutch Reformed Church in recent years build the reputation of being our own soft-spoken horse magician.

While the likes of Pocket Power (broken in), Jay Peg, Dynasty, Merlene De Lago, Bravura, Divine Jet, Aslan, Variety Club (still being assisted at the start of his races) and many others have passed successfully through his hands, Malan is quick to explain that helping thoroughbreds to change their behaviour has nothing to do with ‘whispering’ comforting words in their ears.

It will come as a surprise to some, but the process of teaching a horse good manners, as it were, doesn’t actually include the kind of  face-to-face pep talk romanticised as an almost accepted notion by Redford’s blockbuster.

For a man with no basic education around horses in his  youth, Malan has come a long way. His interest in working with the  thoroughbred world’s ‘problem children’ only arose in his late 30s after he’d taken up riding lessons from his wife. “I learnt to ride quite well and the horse bug bit me. It was only after I got my own troublesome horse that I started asking questions  about  conventional  training  methods as  these clearly had no positive effects on my frightened and confused animal.

“I started reading about horses and how to train them, I watched videos and often stayed up very late to study the available literature, like the works of established horseman, the Dorrance brothers, Ray Hunt, Buck Brannaman, Pat Parelli, John Lyons, Monty Roberts and the more scientific approaches of Stephan Budiansky, Prof George Waring, Dr’s Andrew McLean and Paul McGreevy, ’’ he tells.

Interestingly, Malan’s grounding with Rottweilers would play a part in the development of his skills and adapting his then existing experience with a breed of potentially dangerous dogs, to the equine world. He tells: “In my earlier years I owned pure-bred Rottweilers, a few terrors among them, and I had to study their behavioural patterns in an attempt to control them. What soon became apparent was the fact that I had to take charge. If you don’t train Rottweilers, they end up training you!”

There is however a big difference between dogs as predators and horses as fear and flight animals in terms of their training. Dogs have to hunt for their food in nature. As predators they acquire certain strategies to obtain food and therefore possess a degree of problem-solving. Horses, on the other hand, are the hunted. They run high on adrenaline and are by nature very scared and sensitive animals. They feed on grass in their natural environment and do not have to hunt for food. This is one of the reasons why they have virtually no problem-solving abilities.

Malan tells: “Horses are very good learners, however. The key is to be the guide of the horse, going about it step-by-step and as slowly as possible, especially in the beginning. In essence it means that you have to create an environment where the horse has a feeling of safety and adrenaline levels are kept to a minimum. This can be very challenging to a horse in a domesticated environment. You have to become the one who controls his movements in the way you teach him to conform.

“The way to the feet of the horse is through the brain. If the horse does not understand, it will not respond accordingly. The typical troublesome horse is one who responds from a position of fear. At some point in his life he was scared or threatened, a bad experience that left a lasting response of fear. Those memories cannot be erased; they can however be masked or covered to help the horse to adapt in a domesticated environment.

“A very good example of this would be a horse that is erratic and nervous at the starting stalls, one who has developed anxious responses to certain stimuli around the gates. One has to employ a different way of desensitising him for that troublesome stimuli and getting him to move forward and into the pens, a different method around the situation that caused the initial condition of fear.”

Malan has developed a unique way of training young and retraining older horses with problem behaviour. He has the ability to “get into a horse’s mind” to change its behaviour and to get it to cooperate no matter what the challenges might be. With horses brought to his care he employs a schooling process which entails the application of the principles of operant and classical conditioning.

He says: “Horses learn primarily through trial and error (pressure and release) and by making very subtle associations between stimuli and the environment in which the learning takes place.” He describes his good success rate to the fact that he treats each horse as an individual. No single training method can be applied to every horse.

Horses “speak” primarily through their body language.  They tell you when they understand.  There are three signs which show him when success is near, Malan says. A horse will focus his ears onto you, meaning, it is taking account of the fact that you are there; he will start to chew or licking his lips, meaning he understands what he is suppose to do and he will drop his head in a show of submission.  Then, you know, you are finally getting somewhere!

When he’s not physically working on the niggles of problem horses around the country, Malan spends a proportion of his time assisting with weanlings and the breaking in of yearlings at the Western Cape’s Arc-En-Ciel Stud, with which he has a long standing relationship. He also travels as a handler of horses being exported on chartered flights to Mauritius, Europe and South America.

“I’ve gained lots of experience overseas and made plenty of friends, especially in Belgium, where I have worked several times. I am getting more and more requests to work and lecture overseas and have even had a suggestion of writing a book dealing with my own knowledge gained over the years,” he says.

Malan believes his future lies in educating horse lovers, reaching as many as possible via workshops and perhaps even with the setting up of an educational training centre.

He has also been approached to apply his skills in horse behaviour in the field of Equine Assisted Learning.  “This is where horses are used as educational or assisting aids to everyone from autistic children to individuals recovering from different kinds of addictions as well as personal and leadership development.”

He concludes: “We’re talking about group dynamics. Horses can read human body language, they’re a mirror for what they perceive in humans, hence the success we’ve seen in individuals subjected to so-called horse therapy.”