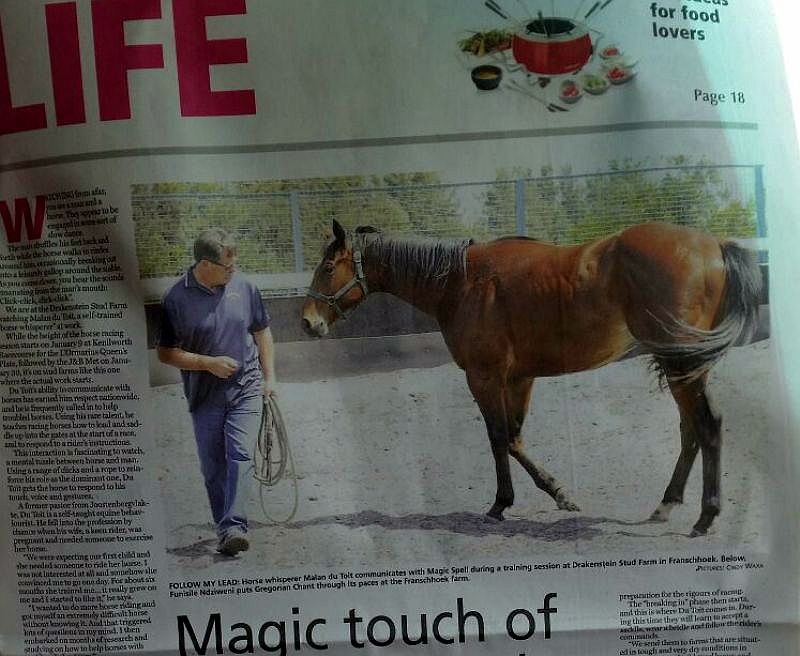 WATCHING from afar, diagnosis you see a man and a horse. They appear to be engaged in some sort of slow dance.

The man shuffles his feet back and forth while the horse walks in circles around him, occasionally breaking out into a leisurely gallop around the stable. As you come closer, you hear the sounds emanating from the man’s mouth: “Click-click, click-click”.

We are at the Drakenstein Stud Farm watching Malan du Toit, a self-trained “horse whisperer” at work.

While the height of the horse racing season starts on January 9 at Kenilworth Racecourse for the L’Ormarins Queen’s Plate, followed by the J&B Met on January 30, it’s on stud farms like this one where the actual work starts.

Du Toit’s ability to communicate with horses has earned him respect nationwide, and he is frequently called in to help troubled horses. Using his rare talent, he teaches racing horses how to load and saddle up into the gates at the start of a race, and to respond to a rider’s instructions.

This interaction is fascinating to watch, a mental tussle between horse and man. Using a range of clicks and a rope to reinforce his role as the dominant one, Du Toit gets the horse to respond to his touch, voice and gestures.

A former pastor from Joostenbergvlakte, Du Toit is a self-taught equine behaviourist. He fell into the profession by chance when his wife, a keen rider, was pregnant and needed someone to exercise her horse.

“We were expecting our first child and she needed someone to ride her horse. I was not interested at all and somehow she convinced me to go one day. For about six months she trained me… it really grew on me and I started to like it,” he says.

“I wanted to do more horse riding and got myself an extremely difficult horse without knowing it. And that triggered lots of questions in my mind. I then embarked on months of research and studying on how to help horses with problem behaviours.”

That was more than 20 years ago. Since then, Du Toit has made a name for himself in the horse racing industry.

He explains that horses with problems are categorised in grades, almost like children at school. “Its like a child in Grade 1, and you need to train the ‘child’ until it gets to Grade 12. Then you can start to ask serious questions from the child,” he says.

Du Toit’s training steps include establishing a relationship of trust with a horse and getting the animal to accept him as its teacher. With gentle direction and training, he then goes about changing a horse’s problem trait until it is ready to race.

“The first grade is to get the horse to focus and to understand the ‘classroom’ situation. Then I perform what I call a join-up or a hook-up, where I get the horse to concentrate on me, to look at me with both eyes and eventually start to follow me around.

“This is when the ‘child’ tells you… ‘I accept you as my teacher and I am willing to co-operate, or at least try to understand’,” he says.

“The next grades include ground control, where we train the horse to move in every possible direction such as backwards, forwards, sideways and in circles.

“Because horses are fear and flight animals, we use a mop to desensitise them so that we are able to touch a horse anywhere without it running away,” says Du Toit.

“The art is to train the horse gradually through the levels so that eventually it’s accepting the rider. We do the training over a period of a month or two, depending on the horse, as each horse is an individual like us human beings.

“The longer the training, the better the horse becomes,” he says.

Although the concept is similar to dog training, a noticeable difference is that horses don’t get rewarded with food, as is done with dogs. Du Toit explains that in the wild, horses don’t have to hunt for their food, and therefore they don’t respond to food stimuli.

“My ability to communicate with horses is a gift I was probably born with, but had to develop. I was fortunate enough to end up in an environment where I work with hundreds of horses every year,” says Du Toit.

Situated at the L’Ormarins Estate in Franschhoek, the Drakenstein Stud Farm is home to a number of South Africa’s top thoroughbred stallions such as Duke of Marmalade, Philanthropist, Trippi and What a Winter.

Racehorses compete in world-class horse racing events such as the L’Ormarins Queen’s Plate and J&B Met, and once they have established a winning reputation are retired to stud farms as stallions.

We meet racing manager, Kevin Sommerville at the L’Ormarins Estate where he takes us through all aspects of a race horse’s life.

It begins with brood mare (a female horse over the age of three).

These are considered the backbone of most stud farms as they are the building blocks of a stud, explains Sommerville.

From the fillies that are in training, only the best are kept to breed with, the others are sold, he says.

The mare is impregnated and then gives birth to a colt (a male horse) or filly (a female horse). The foal (a horse that is one year old or younger) does not leave its mother’s side until it gains strength and confidence.

The foal will be separated (weaned) from its mother when it’s around six months old, and young foals are generally called weanlings because of this.

After a year they are named yearlings, and on some farms they are sent away to other areas or farms across the country to learn to survive in tougher conditions in preparation for the rigours of racing.

The “breaking in” phase then starts, and this is where Du Toit comes in. During this time they will learn to accept a saddle, wear a bridle and follow the rider’s commands.

“We send them to farms that are situated in tough and very dry conditions in order for them to build good bones and structures needed for racing. In order to be a racehorse in South Africa they have to be quite tough, and good bones are a very important part of a racehorse’s development,” explains Sommerville.

“There are some beautiful horses that look like athletes but when you put them into training they can’t cope with the environment that they are being asked to participate in, and that is a great test of their mental and physical strength;

“The finishing line is the ultimate test. Some (horses) are very good at home but when you put them on a racecourse, they crumble. Being an athlete requires a certain level of determination,” says Sommerville.

“This is why the majority of the population of horses are maidens (horses that have never won before). Because the test that determines the best horse is not simple or easy.”

At the end of the colt’s racing career the finest champions are used for breeding, while the others are gelded for their own safety and retired to be riding, show jumping or just campaign horses.

One of the stud farm’s best stallions is European champion Duke Of Marmalade, who is in high demand during covering (mating) season. With a price tag of R100 000 per cover, he has covered more than 120 mares this year.

“The beauty of the game is that a racehorse can come from anywhere. It doesn’t necessarily mean that a good racehorse will produce another good racehorse. It helps, but it’s no guarantee to success, and that is what makes the magic of the game,” says Sommerville.

“Each horse has to go through all these processes to get to the racetrack. He has to beat all the other horses. Then, eventually, he will be so good and win a race like the L’Ormarins Queen’s Plate or the J&B Met.

“There is only one horse that wins it each year, and if you think about all the other horses that are born in this country and others that come from overseas t o try and achieve that one result, it shows how difficult and competitive the sport is,” says Sommerville.