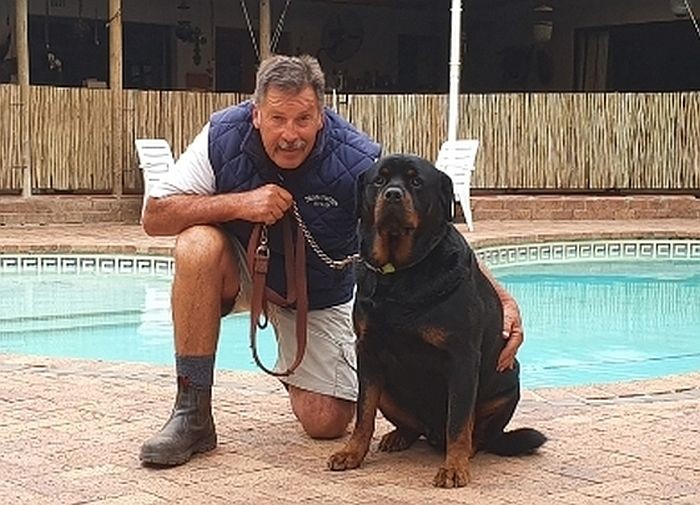 HORSE behaviourist Malan du Toit, who has worked wonders with problematic horses in South Africa this last decade, ended Part 1 of his career review last October, writing, “The biggest eye-opener for me, however, was when I started to learn more about the science of learning, this entails how the brain of the horse works. It opened up a new world and helped me to stop thinking about animals in an anthropomorphic (having human characteristics) way…”

THE interesting thing about my career is that it did not start with horses at all.

After meeting my wife at Stellenbosch University and getting married four and a half years later we settled in one of the suburbs of Cape Town called Maitland. Finnie pursued her career in dentistry and I was legitimised and confirmed in 1988 as the Pastor of the Dutch Reform Church in Maitland.

Way before we got married we had numerous discussions about which dogs we would obtain for our home after getting married. Both of us were raised
around dogs in our families and as children developed a huge love for them as companion animals.

When Finnie was riding and practicing on a farm in Swellendam, preparing for the National Saddlebred Championships in Bloemfontein, she was exposed to the Rottweiler breed.

Finnie was completely overwhelmed by their character, aura and loyalty. At the same time they were probably the best guard dogs one could think of and so the choice was made. A Rottweiler would be our first dog!

We picked a nice Rottweiler bitch called Luna. She was an absolutely divine animal. She was so loyal and attached to us that she could, without any official obedience training, accompany us to the beach without bothering anybody. She was like a first child to us. Unfortunately, she was tragically killed by a car at the age of 3.

We experienced the deepest level of sorrow and were really mourning the death of our dog. I thought that the best way to heal our pain was to get another ‘Rottie’ as soon as possible and so the breeder was called immediately. She had one dog left, a male but she issued a warning: ‘Be careful, he has the tendency to chase the other puppies of the litter away from their food’.

This was something I would only understand later on as our new Rottweiler, Duke, had an extremely dominant and aggressive character and right from the beginning we had problems in establishing control over his behaviour. We realised our ignorance regarding animal behaviour and to address his issues, we decided to take him for basic obedience training.

Needless to say, Duke was an extremely difficult character on the training field too. He wanted to attack every other person and dog while I had to use brute force to contain him. After every training session I felt as if had played a game of rugby! I also had to use harsh methods (as advised by the dog trainer – aggression to overpower him) to curb his violent behaviour, but it actually had no impact on him.

Eventually, Duke was labelled as a ‘fear biter’. This is probably the worst characteristic in the behaviour of a dog and I was told to euthanise him. This was a complete shock to us, because it was like telling the parents of a problem child to kill it because of behavioural issues. We decided to wait and rather attend a training clinic from a Belgian expert on dog behaviour. Maybe we could get some answers there.

This was the best thing we could have done! After assessing Duke, the expert told me that our dog had an
Alpha character (strong leadership abilities) which made him a supreme working dog but at the same time very clever as he was basically training me instead of me doing the training! This was the first ‘wow’ moment in my relationship with animals. I realised, for the first time, how ignorant I was and how much we misunderstood our dog.

This was also the first time that I had to deal with the phenomenon of ‘anthropomorphism’. This is when you attribute human characteristics to animals. I would later see in my career of training horses how this mindset would create serious problems between horses and their owners.

I was advised by the Belgian dog trainer to empower myself with as much knowledge as possible about animal behaviour in general and dog behaviour specifically. And so, my ‘research’ on the subject started. This would eventually be the second ‘wow’ moment in my relationship with animals and would lay the foundation for my work with horses.

For the first time in my life I discovered the ‘science of learning’ and realised it is impossible to train any animal without understanding the concepts and principles of how animals learn. I also read in detail about Prof BF Skinner and Ivan Pavlov and I vaguely remembered that I had dealt with their theories while studying Behaviourism in our Psychology classes at Varsity. Prof Skinner was one of the most influential American behavioural psychologists. He developed the theory of operant conditioning, the idea that behaviour is determined by its consequences, whether these would entail reinforcements or punishments (nowadays we would call it positive or negative reinforcement).

Reinforcements or punishments (the use of pressure) of certain behaviour make it more or less likely that the behaviour will occur again. In operant conditioning the animal associates an action with a specific consequence.

The idea of a variable reinforcement schedule is to strengthen a specific, learned behaviour as the animal will be ‘looking’ for the reward. This brought Skinner to the idea of the ‘shaping’ of behaviour. In layman’s terms, this means that the trainer starts to reward the animal when he sees a little bit of the behaviour he eventually wants. In effect, the animal’s behaviour is slowly shaped in a certain direction. I later realised that this was a concept very few people understood.

A good example of this is loading your horse into a horse box. There are a number of steps by which you shape the horse’s behaviour into loading, but many horse owners don’t realise this – they want a horse to load as soon as possible, disregarding the way the horse has to learn this activity by way of operant conditioning and the principle of shaping.

Pavlov, who was a predecessor of Skinner, is widely known for the experiments he conducted with dogs. He realised that when preparing food for them they would start to salivate. He then rang a bell while he was preparing the food and discovered that the bell would also cause them to salivate without any food present.

Next, Pavlov realised that he could ‘connect’ (or pair) a second stimulus with the original one while still eliciting the same response. This theory was later developed into classical conditioning – referring to a learning activity that associates an unconditioned response (something that naturally results in a response) with a new conditioned stimulus.

And so, my journey with animals began. To make any kind of progress, however, I had to understand the ‘science of learning’. It was vital that I understood what was going on in their minds and how science would educate me on their learning processes.

The gateway through which I could train my Rottweiler, Duke, was his brain. My better understanding of how it worked, had a remarkable influence on our relationship. Duke started focusing on me because he was looking for rewards all the time. This was the crucial learning process that laid the foundation for my work with horses that would follow.