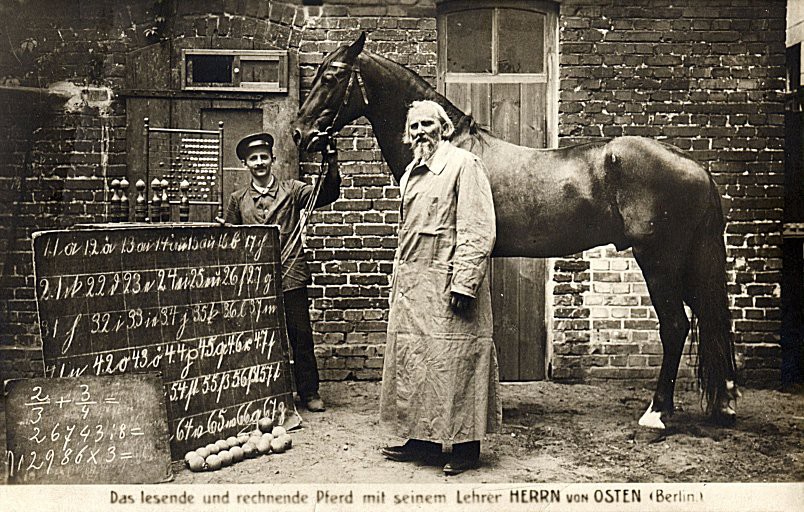 IN the first part of the twentieth century a horse called Clever Hans made news headlines in Berlin. His owner, Wilhelm von Osten, a Berlin school teacher, claimed that Hans could count, tell time, identify coins, musical scores and answer questions about politics and geography.

Clever Hans did many shows to prove his unique abilities. Von Osten, known as a very honest man, firmly believed his horse had the humanlike mental capability to master the subjects he had taught him. The scientific fraternity was astonished by this claims and a commission of the Prussian Academy of Sciences was immediately sent to determine whether Von Osten’s claims were true. Both van Osten and his horse were put under stringent observation while the tricks were being performed.

The commission came to the conclusion that Hans was only doing what horses can do very well. He was conditioned to very subtle cues unconsciously provided by the body language of his owner. After each question his owner would tense up only to relax again as he came to the right answer, offering him a sugar cube at the same time. He learned through many trial and errors that if he stopped pawing at the right time he would be rewarded. He even got some answers right after his owner was asked to leave the room but that was only because the scientists were providing him with precisely the same cues!

So Hans was not extraordinary clever after all. He was just being a horse! This does not mean that horses are not clever, they are, but in a horsy way. What then do we know about the intelligence of the horse? A good starting point in addressing this question would be to begin with the brain of the horse. As this is not a scientific paper I am only considering a few points.

Comparing body mass to brain size humans have much bigger brains than horses. Apparently sixteen to twenty times bigger. Because of the complexity of the horse’s body most of it is used just to keep the horse going. Not only is the human brain comparatively larger than the horses but it contains certain “parts” that helps us to think, learn and reason. These well developed parts are called the neocortex and the prefrontal cortex.

In humans most of the higher mental processes occur in the neocortex and the prefrontal cortex. These parts are much smaller in animals like horses and are used more for tasks relating to survival such as physical sensitivity and locomotion. It thus seems that our horse is not the thinking or reasoning type!

This is the point that animal behaviourists try to bring across. Do not allow your horse to “think” itself out of a situation. It most probably will make a mistake. Proof for this was found when horses were asked to go through a very simple maze. They had an extremely low strike rate and it seems that the ones that made it did so by accident.

The scientists then decided to “help” the horses by giving them a little shock when they walked into the dead end but that made them even more confused. A similar experiment was done with a group of wild horses that walked to a waterhole every day on a certain path. When a fence was erected across that path it made the herd completely confused to the point that they kept milling around at the point where the fence went across the path.  About fifty meters away from the path was a gap in the fence. Despite the fact that one member of the herd accidently ran along the fence because of being frightened by something, slipping through the gap, the others were just completely confused.

Horses can never be human beings. In fact, they were never meant to be domesticated. Was it not for their sociable nature (even to bond with other species) and its ability to adapt to new environments (sometimes completely against their nature) it would probably still have only been food for the predator and humankind.

It is by pure fluke that evolution gave us an animal with that type of nature and with the type of built where we can put a controlling measure in its mouth and a saddle and rider on its back. It would therefore be completely unfair to even try to compare the intelligence of a horse with that of a human being.

I always try to remember this when breaking in a young horse or attempting to cure some or other problem behaviour. At the same time my heart bleeds for every horse that is forced and coerced into something it does not understand with the normal assumption from the “trainer” that it is just a dumb and stupid animal.

Yes, indeed it is a stupid animal but only in a human environment. That is why we need to spend enough time communicating the right messages to our mounts, guiding them and educating them to understand what is expected of them. Indeed even Zenophon in 350 BC had a good understanding of this when he wrote which is perceived to be the first proper “natural horsemanship” training manual.

When rearing children the big secret in understanding them is to become a little bit of a child again. The same applies to our relationship with horses.

-This article was published in The South African Show Horse Publication’s Breeders Edition in September 2008.