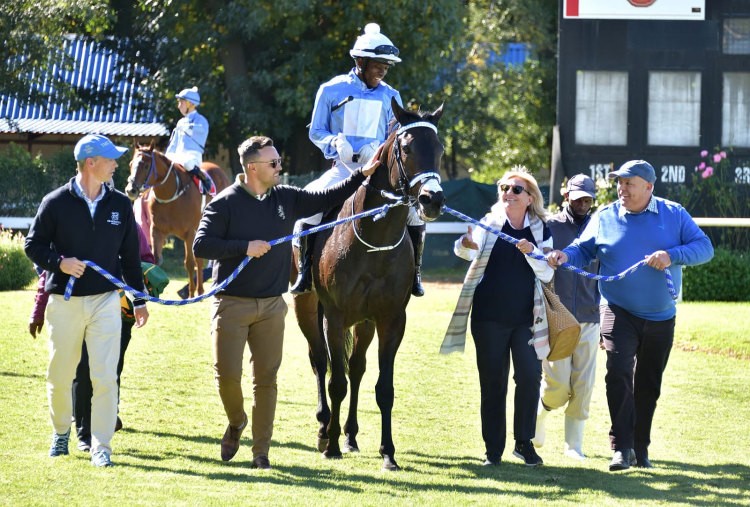 Highly-regarded three-year-old colt Supreme Warrior just needed a bit of attention during a short break from active racing. He returned with a powerful 1200m run, winning at the Vaal on 26 April.

This was an important win, a race considered so important that owner Mrs Gaynor Rupert paid a rare visit to the Vaal. She and trainers Mike and Adam Azzie, and jockey S’Manga Khunalo praised Malan du Toit for his work with this classic prospect behind the scenes.

Malan said: “I was called in to help Supreme Warrior with his behaviour at the starting stalls. On 8 February this year he was carded to race at Turffontein. During the afternoon of the race meeting the Turffontein area was approached by extremely hostile weather. When this happens the rule is, for the sake of the safety of personnel and animals, for racing to be completely stopped until the weather has cleared.

“On this specific day there was an extremely long delay which meant that some of the races during the meeting would have to be run under flood lights. This can be an extremely scary experience for a horse especially if it has not been habituated to flood lights and running under lights for the first time. The reason being that despite the fact that horses are able generally to see much better than humans, it has difficulty to see well in variations of light and dark.

“Horses have much better eye sight than human beings during the daytime. One of the most important attributes of a flight animal in their natural environment is to be able to see well. This helps them to detect any possible danger from attacking predators in time and to be able to run away. It is unfortunately much worse when there are variations of light and dark.

“Dr Debbie Marsden, in her book,” How horses Learn”, explains it very well. She says that human eyes are arranged to help measure distance and speed as we have evolved needing to hunt prey to eat. Predators also need eyes which can adjust quickly to changes in light but this is not useful to a prey animal like the horse. A horse’s eyes take approximately 30 times longer than ours to adjust to variations in light and dark and that is why horses get a bit jumpy in shadows.

“This is precisely what happened to Supreme Warrior. When looking at the course like a horse (during night time with the flood lights on) one can see variations of light and dark with a lot of shadows on the track and behind the pens. To the horse this might not be shadows but obstacles. Going down to the start Supreme Warrior was shying away from most of the shadows. By the time he arrived at the starting stalls he was so upset that he almost did not load and t ran well below par.

“The issue now was that the horse could have made a negative connection (learning through association) to the starting stalls and because of that have basically learned how not to load.

“The Azzies have been clients of mine for many years. I got to know them as trainers who do not wait for a problem to escalate but to sort it out as soon as possible. So they called me in to address the issue immediately especially because they rated this horse.

‘“Supreme Warrior is a big horse with presence,’ S’Manga told viewers. On course he becomes a beast, he kind of pumps himself up before the race and, being a colt, he can also be a handful at the start.

“I went back to basics with him and put him through a process of intensive and extensive ground control exercises.  This is also known as foundation training and comprises of a series of exercises on the ground by which horses are trained to respond to the handler in a respectful and orderly manner.

“It was specifically Mike Azzie’s instruction –” try to switch the horse off at the start”. This is not an easy task per se, because when a horse gets to the start his flight response is already activated because he anticipates flight, i.e. that he is going to race.

“So importantly we nipped any adverse behaviour in the bud and took preventative action. I managed to get him to switch off at the start, he loaded the best he’d ever loaded, and he ran well and won a good race. This proved once again how basic ground control is important before one starts to work on the loading process.”

“Practice makes perfect and that is why we will refresh him before he goes to Durban for the Guineas.  I’ll be watching him. He is a nice horse and I hope we see more results like today.”

Supreme Warrior is by Vercingetorix out of Sovereign Flo, by Captain Al.