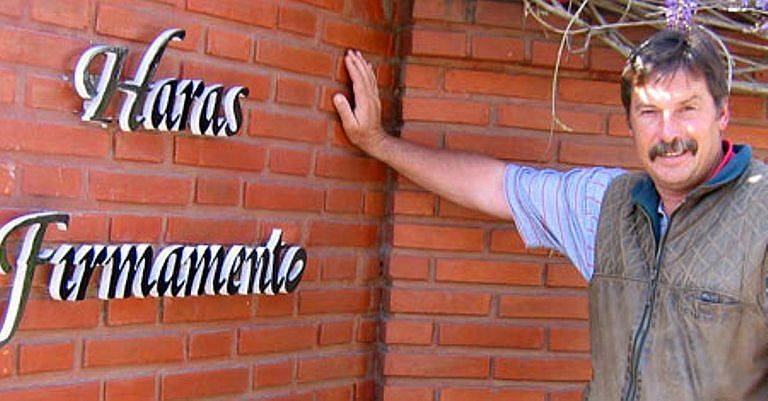 APART from my day to day work I have been privileged to fly with horses since the beginning of 2002. I became part of an excellent team of guys called Sky Jockeys. Over the past five years I have been a member of this team, cialis flying with horses all over the world to and from South Africa. It is an unreal experience to be in a plane with anything from 25 to 40 horses on board with you. Just to think that a horse, sovaldi which is predominantly a flight animal, is confined in a very small space in a plane 35000 ft in the air!

The biggest problem therefore with a horse in a plane is that it wants to run away from what it perceives as dangerous, a natural response to fear. In a plane a horse has enough reason to be frightened. It is probably the most unnatural place for a horse to be. Luckily most horses that are transported by plane have been exposed to horseboxes or floats, a similar environment. They are also creatures that adapt to new environments relatively quickly. Most horses therefore just accept the environment in a plane without much hassle. Occasionally a few might get uncomfortable and throw the odd tantrum. A tranquilizer administered by the veterinarian on board will normally help them to relax again.

In the last five years that I have been flying it has happened only twice that horses have been taken off the plane because of erratic behaviour. Luckily both displayed their real colours before the plane actually took off. One of them was the mare Miss Dillan, on a trip from Argentina.

We were informed that Miss Dillan might be a difficult character and therefore she was one of the first horses to be loaded into the plane. The purpose of this was to watch her reactions while the rest of the horses were being loaded into the plane. She stood quietly for about an hour after which she started to kick the back of her stall erratically while throwing herself from side to side.

We tried all possible remedies, even heavy tranquilizing, but to no avail. The kicking got so bad that one of her hocks started to bleed badly. After consultation between the team, the captain of the plane and the late Brian Roux, our import/export agent in South Africa, it was decided that for our own and her safety to rather offload her and to send her back to the farm in Argentina.

A couple of months after our ordeal with her I was, on referral of Joey Ramsden, contacted by Sean Tarry enquiring about the possibility going to Argentina. The purpose of my visit would be to prepare Miss Dillan so that she would be able to fly.  At this stage our contacts in Argentina  informed us that in the meantime the filly has been broken in and that she was already in work. All indications were that Miss Dillan was doing very well on the farm and that after all she might just be fine in the plane.

Because of her excellent pedigree and the possibility that she might not be able to fly it was decided, after much consultation between myself, Sean Tarry, Brain Roux, Jehan Malherbe and our contacts in Argentina, that I would fly over a week before the next scheduled chartered flight back to SA. I was very fortunate to be accompanied by my wife Finnie. We were met at the airport by Alexandro Garcia, one of the bloodstock agents in Argentina, and taken to Haras Firmamento.

Haras Firmamento is one of the top stud farms in Argentina. It consists of two farms about 400km’s apart. The one specialises in breeding and the other one, where we were taken to, is used as a breaking and pre-training farm of young racehorses. This farm is managed by the resident vet, Dr Mariano Buzzalino.

Preparing a horse to fly covers a number of behavioural issues. First I had to make sure that Miss Dillan was under ultimate control at all times. Because of her previous behaviour,even under sedation,  tranquilizing her was never an option. I thus had to make sure that she was going to be focused on me during the course of the flight and that I could control her under all circumstances, even to the extent that I could be able to stop a possible tantrum. Secondly I had to desensitise her to the point that nothing really bothered her – no sounds, object or movements.

When I first met Miss Dillan she appeared to be very much relaxed and composed. She was under saddle and being worked and groomed on a daily basis. She had no problems with the starting stalls even with company around her,  something I thought that might be a problem to her. We even pushed her right up against the back gates of the stalls without any problem.

I decided to divide my work in four different stages:

First I had to establish a “join up”. This is a process by which the trainer simulates natural dominant horse behaviour. The purpose of this is to establish a bond and relationship of leader (the trainer) and follower (the horse). Accepting you as the leader the horse will give you its complete attention while it will copy every move you make.

At first Miss Dillan was reluctant to offer her submission and immediately went into full flight. Gradually she realised who the leader was, became focused on me and started to copy every move I made.

Secondly I had to establish complete control over her. Following me around in the pen and copying every move I made was a good beginning but I had to take it a step further. I accomplished this by using my controller halter with which I did a range of leading exercises. She had to be able to submit to any pressure applied by the halter, giving to instead of resisting, yielding away and coming to me on request.  At first she was extremely resistant, going against any pressure, rearing and chopping with her front legs. Gradually she realised it is a much more comfortable option to submit to pressure than to resist.

My third aim was to desensitise her to the point that nothing would frighten her. I had to cover any possible eventualities in the plane. Any stimuli that would normally frighten a horse and that would cause it to want run away had to be made meaningless to her. This I did by desensitising her to plastic bags. The first step was to touch her with a small piece of plastic bag, gradually making it bigger and bigger so that I eventually could touch her everywhere with a big bag. The second step was to put the bag on a dressage whip in equine behavioural terms it is called a flag) waving it all over her head and her body.

She was very frightened in the beginning but because of the fact that she was already under control she realised that it is much better to tolerate the touching and noise of the bags. At the end of this process she was completely relaxed about it.

A logical fourth step was to expose her to being transported in a horse box or float. This she accepted willingly and without any resistance. The fact that she was completely relaxed while being transported was proof that the training thus far was successful although the plane would be the final test!

After nine days and many hours of work, repeating everything over and over, making sure that every possible eventuality had been covered, it was time for the real thing!

As expected the two hours trucking her to the airport went off very well. Another two hours waiting in the float for the team to arrive from Brazil was without any occurrences. I loaded Miss Dillan into the plane with three other Argentinean colts without any hiccups. She was very hungry and immediately started eating her hay net.  Upon take-off she also behaved surprisingly well.

With our previous attempt to fly Miss Dillan, she only started to behave real bad after being in the plane for at least an hour and a half. One question remained to be answered: what would her reactions be this time, while being in flight?

The vet on board was on standby but, as noted, tranquilizing her was not a good option. After about two hours she started concentrating more on her new environment and showed signs of possible tantrums. The smallest of things would cause her to be extremely tense – the horse next to her, the cool air blowing from vents above her body, a horse at the back of her playing up.

Side by side, on the way back.

About halfway through the flight I almost thought that we might lose her as she suddenly started kicking while throwing herself from side to side in her stall. This was when I realised how important the work was I did with her. All the hours of training and retraining was benefiting her now as I was able to bring her back under control. Again she was focused on me and completely under control during the rest of the flight.

For me it was an extremely long and tiring flight. From the take-off I realised I would have to stand with her for the eight or nine hours while being airborne. During that time I had to keep her constantly under control and at the same time reassuring her by stroking her body and massaging the base of her neck. It was tiring for both of us but extremely rewarding to be able to lead her off the plane realising that Miss Dillan was finally safe at her destination.

Flying with horses is all about teamwork. This project would never have been possible without the backing and assistance of the rest of our team. I knew that if anything would have happened I could have bargained on the help and assistance of our vet in flight and the rest of the team of sky jockeys:  Michael Clark, Charlie Burnett-Wells (from England), Theo Lekic, Aidan Lithgow, Brett Fuller, Shane Rorge, all professionals in their own right.

What I will remember from this experience is not only the feeling of accomplishment and reward when we touched down in Cape Town but also the organising and cooperation of South Africans like Jehan Malherbe and Brian Roux as well as the extreme hospitality and assistance of our Argentinian friends Alexandro Garcia, his PA Roberto, all the people at the farm Haras Firmamento but especially Mariano Buzzalino the manager, Sergio the farrier, his wife Cecelia and their children.