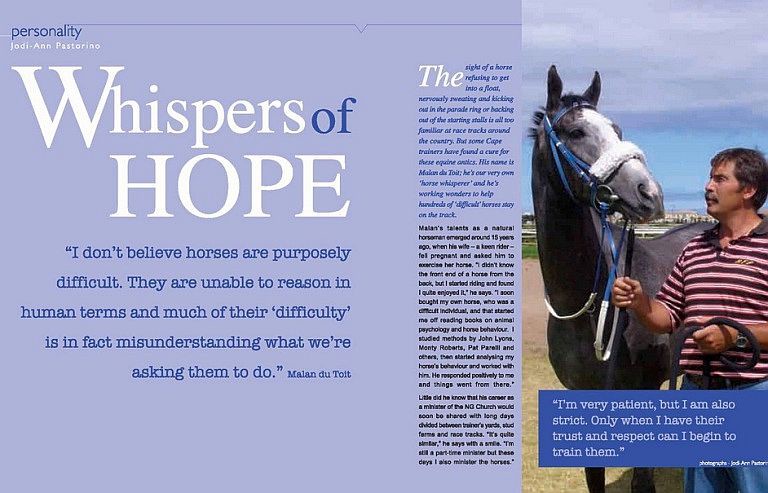 THE sight of a horse refusing to get into a float, nervously sweating and kicking out in the parade ring or backing out of the starting stalls is all too familiar at race tracks around the country. But some Cape trainers have found a cure for these equine antics. His name is Malan du Toit; he s our very own ‘horse whisperer’ and he’s working wonders to help hundreds of ‘difficult’ horses stay on the track.

Malan’s talents as a natural horseman emerged around 15 years ago, when his wife – a keen rider fell pregnant and asked him to exercise her horse. “I didn’t know the front end of a horse from the back, but I started riding and found I quite enjoyed it,” he says. “I soon bought my own horse, who was a difficult individual, and that started me off reading books on animal psychology and horse behaviour. I studied methods by John Lyons, Monty Roberts, Pat Parelli and others, then started analysing my horse’s behaviour and worked with him. He responded positively to me and things went from there.”

Little did he know that his career as a minister of the NG Church would soon be shared with long days divided between trainer’s yards, stud farms and race tracks. “It’s quite similar,” he says with a smile. “I’m still a part-time minister but these days I also minister the horses.”

“I don’t believe horses are purposely difficult. They are unable to reason in human terms and much of their ‘difficulty’ is in fact misunderstanding what we’re asking them to do.”

Malan has worked with many of the Cape’s top trainers – Joey Ramsden, Mike Bass, Basil Marcus and Dean Kannemeyer to name a few – and his success is unquestionable.

He has taken hundreds of previously unmanageable horses back into racing and also works with the youngsters at Arc-en-Ciel Stud in Wellington, breaking them in (or ‘starting’ them, as he prefers to call it) and pre-training them for their racing careers.
His methods are based on leadership, understanding and trust. There’s never any force involved, but he leads his ‘pupils’ with a firm hand and sets up clear boundaries from the outset. “In nature, a herd is a hard and cruel environment and the herd leaders give out strict and rigid discipline, so it’s important to gain a horse’s confidence in my leadership from the beginning,” he says. “I’m very patient, but I am also strict. Only when I have their trust and respect can I begin to train them.”

Malan combines two approaches in his work and believes the combination is vital for success. He looks at a horse’s natural state – how it behaves in a herd – and also takes into account the science of a horse, for example how it’s put together, its eyesight, memory processes and the sensitivity of its ears. “It’s important to understand both of these aspects and then to put them together when you’re working with a horse because it’s pointless asking a horse to do something if it’s not capable of responding to it. ”

Horses learn through condition streaming and repetition. They are creatures of habit and Malan taps into this by taking them back to the basics, breaking their routine and re-conditioning them. He’ll start by establishing himself as the leader, using assertive body language and various repetitive exercises to get the horse’s attention, then asks the horse to move in a certain direction by applying pressure to a specially designed pressure halter. If the horse resists, the pressure continues, but as soon as the horse moves in the right direction, the pressure is released. This release of pressure is the horse’s reward. “They quickly learn that it’s more comfortable to be in the place that I ask them to be in, rather than resisting me,” he says.

This method of pressure – release – reward is the basis to all his training and his exercises are repeated over and over until the horse is comfortable before moving onto the next step. By repeating things over and again, the horse becomes reconditioned, these new experiences get stored in its long term memory and the old ‘difficult’ habits disappear.

Re-training a horse can take from as little as 15 minutes to six or seven one-hour sessions. It all depends on the horse. Malan tries to be flexible in his approach and to see each horse as an individual. There’s a lot to consider: is the horse a slow or fast learner; a dominant or submissive personality; is it out of a difficult line; does it have quirks caused by its previous experiences with humans? He takes it all into account and adapts his approach accordingly.

“Sometimes if I’m having a problem with a particular horse, I’ll go away and think about it, perhaps read up on it and then go back with a new approach. It’s important to be flexible and see things from the horse’s perspective.”

Malan spends much of his time at trainers’ yards, but is also on hand to help at race meetings. With all the excitement and nervous energy before a race, his ‘pupils’ need him more than ever and his presence helps to reassure them. “By keeping them under control at the starting stalls, they stay more relaxed and are able to put their energy into the race rather than using it up at the start,” he explains. “I believe that the horses I work with can improve their performance by at least 25%.”

“It’s pointless asking a horse to do something if it’s not capable of responding to it.”

This is re-affirmed by trainer, Joey Ramsden, who says investing in Malan’s skills is the best investment he’s made with problem horses.  “We’re lucky to be able to have access to his expertise,” says Joey.  “His methods work. Our young horses are well prepared for racing, better behaved on the track and the performance of our young and older horses has definitely improved since he’s been working with us.”

Two of the 2007 J&B Met favourites, Mike Bass’s Pocket Power and Joey Ramsden’s Silver Mist are testament to Malan’s training. Both horses were broken in by him. “Silver Mist is an easy horse,” says Joey. “Very laid back. He just gets on with his job.”  Another well-known horse, the 2003 July Handicap winner, Dynasty, is also a former ‘pupil’.

It’s a long way from ‘Big Appetite’ – the first racehorse Malan ever worked with back in the early 90’s. He was suspended several times for misbehaving at the starting stalls, but got back on track after a few sessions under Malan’s guidance.

“At the end of the day I do this for the sake of the horses, not the humans,” says Malan. ”They’re the athletes that keep this industry running and I feel very privileged to be able to work with them.”