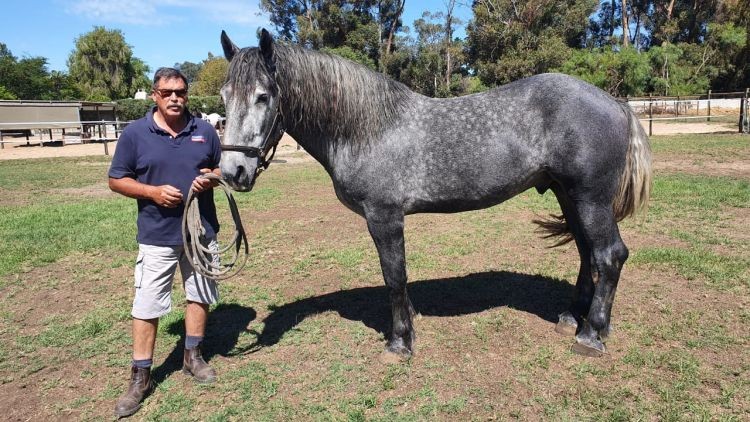 Malan du Toit does plenty of work behind the scenes – we hear of his success with racehorses but a chunk of his basic work is performed ‘breaking in’ young horses.

Malan tells: “Horsey people have their own ideas of how to break in their young horses but I often encounter problems later on with horses who were incorrectly broken in.

“The basics remain the same, good ground work, operant conditioning, how to run and stop, walking under a saddle and so on, but it is a process, not an instant thing one can do before breakfast. If they’re poorly broken in young, it shows in their behaviour later on.”

Malan is currently working with a two-year old Percheron colt named Obiron. He’s an original Percheron owned by Dirk and Annetjie Coetzee, who want him broken in and schooled as a riding horse.  The Perchorons are well muscled, and known for their intelligence and willingness to work – a breed of draft horse who has been mated with ‘lighter’ horses like thoroughbreds in recent years so they can be used for riding.

“I am also working with a Shire horse at present – Shires have at various times held world records both for the largest horse and for the tallest horse. The Percherons and the Shires are normally very relaxed and nice to work with.”