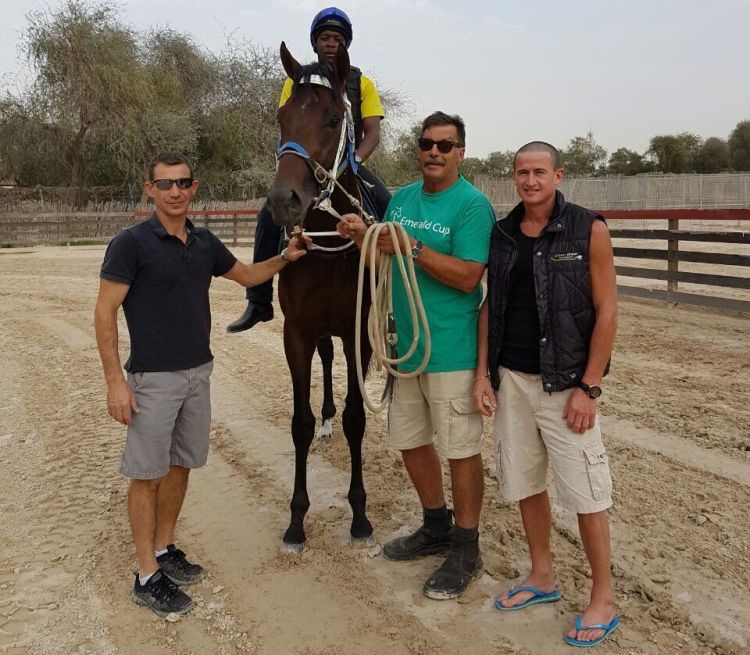 TROUBLESOME three-year-old Fawree was passed through the pens without hassles at Meydan in Dubai on Friday morning after a successful week in the hands of Malan du Toit, South Africa’s leading equine behaviour therapist.

Fawree’s notorious behaviour has improved steadily, and step-by-step, during the course of the last five days and Du Toit commented:   “He is actually a very nice horse and it has been a pleasure to work with him. He was insecure when I saw him for the first time, but he responded positively every day he was very quiet and well-behaved when we took him to the pens on Thursday.  We loaded him without a hood and he was calm and relaxed. He stood next to his companion for a few minutes without playing up at all.

“This morning Fawree was a bit bullish after he completed his work on the track, but we pushed him back and he loaded fine, once again. He stood still, this time he was assisted by the handlers who will work with him on Dubai World Cup night.

Du Toit added: “Starter Shane Ryan and his lads have been very helpful and they know exactly how to handle Fawree now. I told them not to be scared of him. Knowing the signs of previous horses I have worked with, a few even worse than Fawree, I think that we’ve got things under control. There were horses galloping on the track around him yesterday and today, and some other activities in the area, but he stood completely still, he wasn’t fazed. That is always a sign of progress and I am delighted with what we’ve achieved.

“I won’t be allowed to work at the starting stalls on Dubai World Cup day, but I am staying on in Dubai a few more days. Fawree is growing in confidence and we will focus on cementing his new patterns now.  He will probably have two more reinforcing sessions when I am not here next week. Anything can happen on World Cup night, but I am confident we have done enough.”