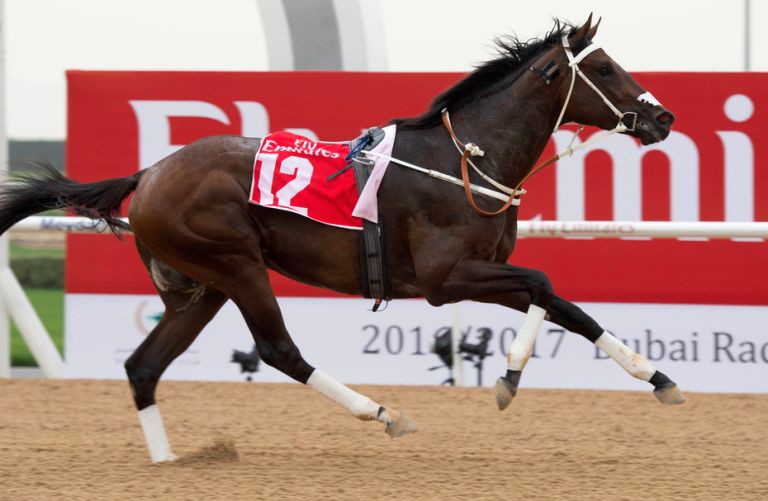 The colt’s participation in the Gr2 Derby on Dubai World Cup night hangs in the balance after he burst from the pens in last Saturday’s Listed Al Bastakiya at Meydan, dislodged his jockey Bernard Fayd’herbe, continued riderless and was declared a runner by stewards of the ERA (Emirates Racing Authority).

Fawree has been noted as a horse with problems at the start, but they had been addressed in as far as possible by Mike, his team and the team of ERA starters  – so much so that he had managed to start and complete two previous races for a second and a runaway win.

This time, in his third start and an important race ahead of the UAE Derby, he jumped from the gates a moment before the starter had pushed his button.  He stumbled at that, dislodging Fayd’Herbe and then continued to complete the race, riderless.

Mike said: “This was nobody’s fault. Fawree walked into the pens twice before with a hood fitted. It has come down to perfect timing. The moment the hood is removed he jumps, and that has worked twice.  This time the hood was removed a split second before the starter pushed his button. Fawree lunged forward just that split second too soon.”

Mike said that Fawree’s attitude will have to addressed again and that Du Toit will be flown to Dubai to help. “We have to call on the horse whisperer now, we have a lot to do and only two weeks to do it. We will have to prove to the stewards that Fawree is tractable so that he can be considered for the Derby. He’s a very talented horse, it’s a pity he’s such a complicated talent but we’ll do our best.”

Du Toit commented: “This will be a challenge, but I believe I can help with Fawree.  There are a few administrative matters to attend to, including permission to work in Dubai as a licensed official of the NHA. I’d like to meet with the starter and his team, everyone involved to get the full picture. But the sooner the better.  I want to get to work with him so we can cool him down a bit. He looks quite full of himself!”

What’s In A Whisper? Malan vs Monty
Malan gets Fawree to change his habits!