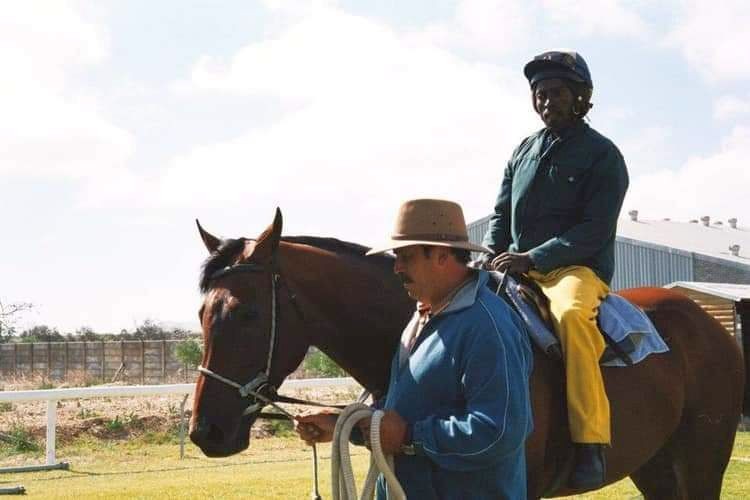 THE racetrack and stud achievements of Dynasty aside, the late, great stallion also launched at least
two known careers, including those of his work rider, “Sparrow” as a successful businessman and
Malan du Toit, the former Dutch Reformed Minister who became a world-renowned Equine Behaviour
Therapist.

Let’s start with “Sparrow” first – here’s a man who was so successful as the work rider of Dynasty that he is
rumoured to have saved enough money to start his own business and trainer Dean Kannemeyer tells:
“Sparrow was my top work rider, he rode Dynasty in morning gallops when Karl Neisius wasn’t available.
But Sparrow left the yard after the days of Dynasty to open a shebeen, which he is still running successfully
today.

“Whether his investments in his business came from money he made from backing Dynasty I can’t confirm,
but at one stage he was working two jobs. He was riding work in the morning and managing his business for
the rest of the day and it got too much. I recommended he focus on his business and I think he’s got more money than most today!”

Kannemeyer and his connections, along with the racing population, were mildly shocked when Dynasty
was beaten by Domino Man in the Gr1 Cape Guineas in January 2003. He was getting coltish, troublesome
at the start and with his trainer having earmarked a string of big races including the Durban July, it was
essential to calm him down.

Malan du Toit remembers: “Dean had heard of me through word of mouth, I’d had success with a few
handicappers and jumpers, so he decided to take a chance and called me in to work with Dynasty. The racing industry was hesitant to use my services. First of all I wasn’t really proven with horses at high level, secondly I came from a background in the church,” hejokes.

“So Dean was brave, but he supported me, he asked me to do everything I can to help Dynasty at the starting
gates. I set out to work alongside Gavin Pickford, assistant manager at Drakenstein Stud. He was a handler in those
days and he was very good at what he did. We had to start away from the stalls doing the ground control, as we call it. That was teaching Dynasty to trust us, slowly at first, following our instructions, moving to certain gestures and so on.

“He was a very clever horse, he was amenable and calm when he was away from the stalls and he allowed us to form
a bond with him, he gave us his assistance. At the stalls, he became a handful, he was really difficult, he was prone to kicking out wildly.

“We persisted and the trust between us grew stronger. After a while Gavin would lead Dynasty into the gates and I would be pushing on his flanks. We got him into the right frame, that is a frame of mind in which he started to trust us fully when he saw us, and obeyed our instructions.

“With Dynasty the most important thing was to ground him, to calm him down as he reached the stalls area and then to lead him towards it.

“His next race was the Gr1 Cape Derby and all went well. Dynasty went in without trouble and he won the race by
nearly four lengths, everyone was pleased.

“Today, I like to do at least one refresher course when a horse travels to another province. I am often
requested to fly with the horse I am working with, to be by his side all the way. I am flown between provinces
even for Maiden Plates because my being there helps the horse to remember the work he has done.

“In Dynasty’s days my work wasn’t as scheduled and refined as it is today. With the horse in the right
psychological frame, Dean decided we’d done enough. Dynasty got through the KZN season with a number of
big wins, but the frame had started to wear off when he reached the July. I recall him being somewhat of a
handful for jockey Robbie Fradd, shaking his head around and then tugging himself to the front from a
wide draw. But he’d remembered enough, he went into the stalls and that’s all that mattered.”

Du Toit concluded: “The photo of Dynasty I supplied was taken in the days before smart phones, we used
an Instamatic Camera, but it is special because this was my acid test.

“Dynasty launched my career as a horse therapist, he was the first major runner I worked with. Indeed he
opened the door to so many others including Jay Peg and Variety Club and some of his sons like Jackson
and Legislate, all with the same clever and amenable characteristics as their sire.”

Proud of Tarryn and Oberon
A truly memorable day with Anchen and Bon Ami!