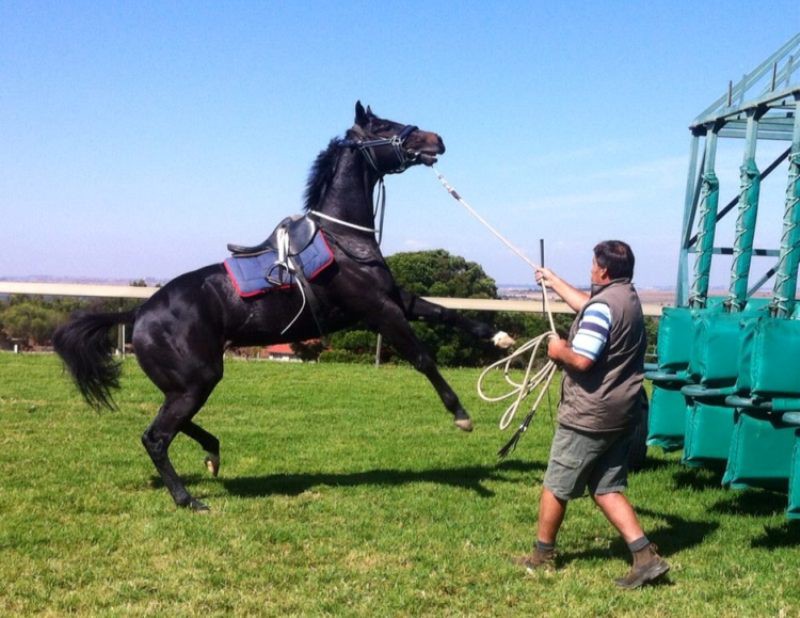 The horse, treat which Du Toit bought 11 years ago, purchase was uncontrollable. But for two years Du Toit worked with him, trying to understand and train the animal. It was a struggle that set Du Toit on a new career path as teacher and psychologist to top horses – and saw him at the Met yesterday keeping some of South Africa’s most expensive animals calm.

Today Du Toit is a part-time NG Kerk dominee to his Maitland congregation on Cape Town, and spends the rest of his time travelling to training farms and racecourses, where he breaks in young horses or helps problem horses. “I get the horse to understand I’m the teacher,” said Du Toit. He is the student and the paddock is the classroom. And what is a good teacher, it’s not someone who has to shout for you to listen.”

Take racehorses, for instance, which often have problems going into the starting pens. In practice sessions, Du Toit will first lead the horse around, so it learns to submit to him. Eventually the horse will get to the pen because it will no longer scare or confuse the animal.

Du Toit feels the pressure on race day where he has only 30 seconds to lead a horse into the stating gate. It all comes down to you. “That’s when you get really nervous”, he said.

Du Toit is completely self-taught but his approach is one than is being increasingly used the US and UK.

Top racehorse trainer Andre Heyns said Du Toit worked with two of his problem horses. One wouldn’t go near the starting pens, but both are fine now.

His method is unusual but he explains everything he is doing. Balancing two jobs is also hectic – once Du Toit had to rush straight from the track to change. His congregation is still getting used to the idea of him being part-time, he said, and some members find his other life strange.

“People may say the race track is not the right place for a minister, but I’m not involved in the betting,” said Du Toit.