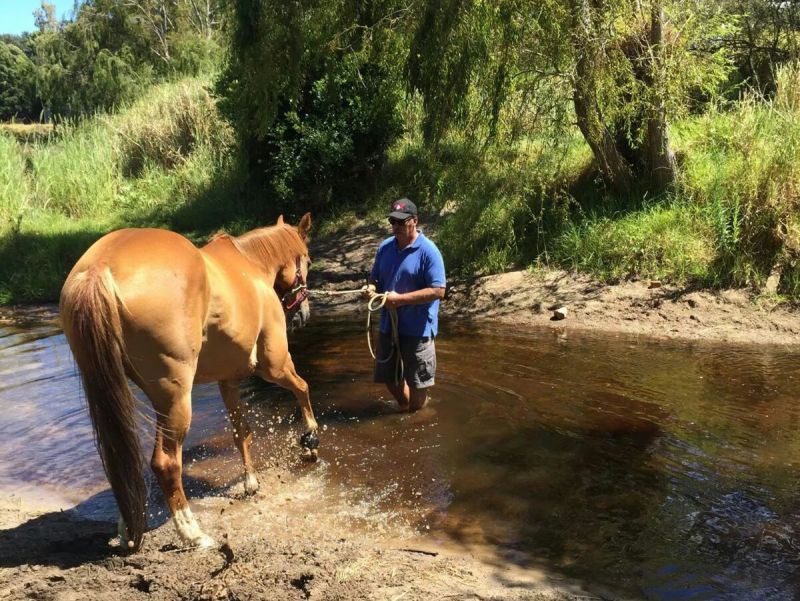 DOMINEE Malan Du Toit of the Maitland Reformed Church spends a lot of time at Cape Town’s racing stables. But his congregation can rest assured he’s not there to pick up racing tips from the horse’s mouth.  His job is to talk horse sense to problem thoroughbreds and incredibly enough it works.  Mr Du Toit has an uncanny knack of communicating with horses and has become known as Cape Town’s horse whisperer. Along the lines of the horse shrink featured in the movie of the name.

A horse whisperer is to equines what a psychologist is to humans, stuff except in the case of the whisperers there is no formal training. The ability to communicate with a horse is a rare talent, viagra you either have it or you don’t.  Mr Du Toit seems to have it in abundance. He developed it after working with a horse of his own that had become unmanageable. After discovering his talent for dealing with problem horse, he read up on the art.

He is now in demand with racing trainers and the horsy set throughout the Cape where he is called in to deal with horses that cause trouble in the starting gates or refuse to enter their trailers. He also treats horses that have developed bad habits such as kicking and biting- much as a psychologist works with a problem child.

Mr Du Toit says his method is based on the natural dynamics operating in a herd of horses. “I take what happens in nature and apply it in a domestic situation,” he said. He explained that in the herd, it was the dominant mare that took naughty youngsters in hand. He mimics this by working first in a small enclosure to get his “patient” to submit to him. He does this without using force but engaging in a mental tussle with the horse until the animal submits of its own free will.

Depending on the horse and the nature of the problem, the amount of time spent laying the foundation can vary tremendously. Mr Du Toit said his experience enabled him to communicate with the animals in such a way as to uncover their hang ups. Some of the problems were the result of the horse getting a fright, others came from a history of mishandling or just plain stubbornness.

He is most frequently called in to help trainers whose horses are reluctant to load into starting gates at the beginning of a race. Horses which continually balk on entering the gates can be suspended from racing. At the Western Cape Racing stables in Phillipi this week, he put two-year-old youngster George through his paces. Trainer Erica Beck explained that George had been hand-reared, had no respect for humans, making him difficult to handle.

Mr Toit showed how, using only gentle persuasion, he got George to follow him into a small enclosure. To communicate, he makes kissing sounds, which after a session of several hours can leave him with lips feeling permanently puckered. By playing the role of the dominant mare in the herd, he soon had George at his beck and call.

He uses a rope – not a whip- as gentle prod to reinforce his role. When George walked up to him and gave him a playful nip, Mr Du Toit moved confidently toward the horse, making him back off. Then with kissing sounds, he encouraged George to walk toward him, rewarding him with a rub. This soon became second nature for George – the shrinks would call it positive reinforcement.

Mr Du Toit teaches the horse not to resist while being led or tied up, before moving on to more advanced work such as walking into a horsebox or into the starting gates. He says he “gets into their minds” and through conditioning, the horses begin to pay attention and focus on the task at hand. Watching him work with George it was evident that he had a rapport with the animal, alternately rewarding and pushing, just enough for voluntary submission.