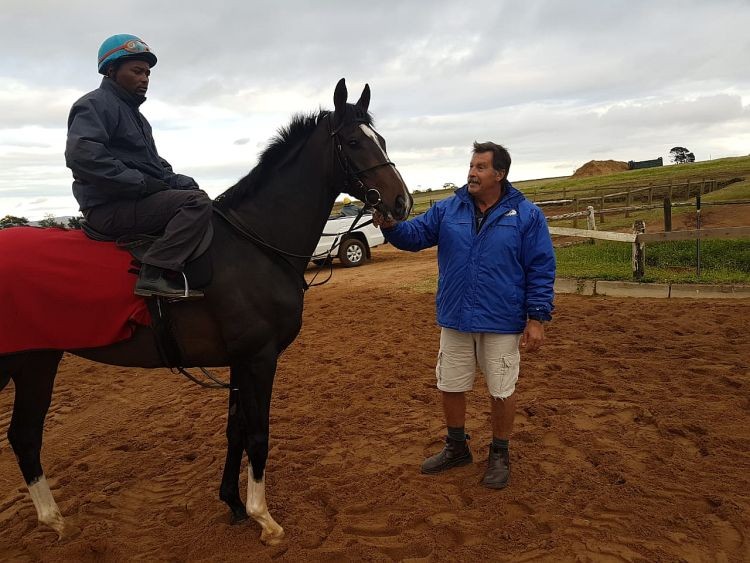 THE “stories behind the story” are what make horseracing so rich in the literature it provides every day, most of which go unreported because there are simply too many horses, too many breeders, owners, trainers and jockeys and not enough journalists employed in racing to put the countless tales of triumph and defeat down on paper.

Equine Behaviour Therapist Malan Du Toit had a pivotal role to play in the success of three-year-old Vodacom Durban July hero Do It Again, one of only a handful of horses in his 18-year career in the complex field of horse behaviour that made him scratch his head and “feel like a fool”.

Du Toit first encountered Do It Again as a yearling in 2016 at Drakenstein Stud in Franschoek where, alongside the other yearlings on the farm, he was put through their yearling schooling program which includes breaking in and pens practice.

“Do It Again was a lovely yearling and he was reasonably calm and quiet broken in by myself and Jason May and work rider Thabo of the Drakenstein team. He was well-behaved in the peaceful surroundings of the farm.”

Things changed when he went into training and Du Toit tells: “It is not uncommon at all for horses to become livelier and energised when they enter a training yard and start working purposefully alongside others. Do It Again was still fairly relaxed, a nice horse in his stable but he started to wake up on the training tracks and became a handful, he’s a horse who does things his own way.”

Do It Again grew progressively stronger, he was fiery and troublesome, especially at the races. He managed to win his first two, despite issues at the pens, and after his second race jockey Bernard Fayd’Herbe suggested that they may get worse and that Du Toit be called in to help.

Du Toit recalls: “This was to be quite a challenge. Horses are natural flight animals, when they get into the racing environment, especially, they anticipate flight and they tighten up, prepare themselves to run with the rest of the herd.

“I applied my tried and tested methods to Do It Again, worked with him for several days but he got progressively worse and it soon became evident that he didn’t give a damn for being taught how to behave at the pens. He was the boss and he knew it. He just wouldn’t give in.

“Things got so bad that Justin, a superior horseman, eventually told me to stop whatever I was doing! He and the rest of the stable were worried that despite my good record I was going to mess things up, that Do It Again would never relinquish his bad manners, that I’d be making his attitude even worse instead of teaching him to behave.”

“We backed off Do It Again, left him alone and I felt puzzled, because I hadn’t before encountered such a problem horse. I had a few sleepless nights, thought about it and recalled the old saying, ‘Only a fool can expect different results if he continues doing things the same’. I decided to try something new at the pens.”

Do It Again appeared to calm down a bit when he got to Durban in April to be prepared for the KZN Champions Season. Snaith decided to give Du Toit another chance and said: “Just don’t mess with his character. We’ve seen that he does what he wants. Don’t take his natural spirit and energy away from him.”

Du Toit explains: “My new approach was to lead Do It Again around at the back of the pens, without his jockey, to walk him on the rein for a while and then to slip the hood over his head casually. The jockey was to get on at the pens only.

“Before his first race in Durban, the Daisy Guineas, I wanted to try my new plan but Bernard felt it was okay if he stayed on top of the horse. But we battled again. Do It Again was back to his troublesome self and a few heavy guys had to push him into the stalls which is not ideal especially for Graded races because it saps the horse’s energy which is needed in the race. Thankfully, he made the jump and won despite his antics.

“His next start was the Daily News and this time Bernard got off at the start. I walked around with Do It Again, slipped the hood on and took him right up to the pens, where the jockey got on and he walked in immediately, without giving us any trouble. He jumped well and while he finished fourth, it was a good July prep.

“Last Saturday we went with the same procedure. The start was delayed, but I walked Do It Again around and he was relaxed. When the time came, we slipped the hood on, walked him up and Anton Marcus got on at the front of his stall gate. He went in like a baby, jumped well and won!”

He concluded: “This was another learning curve, it never stops with horses, it was a humbling experience that taught me again to always think out of the box when it comes to horse behaviour. With Do It Again, it looks as if we’ve come out winning on the other end!”